Only five of us out last night at the BAD gamers, but we got some good games in nevertheless.

Ben took Darren S and Mark H through a starter battle of Dystopian wars with the East India Company coming to blows with the Polish- Lithuanian Confederation. Not sure how the geography on that one worked out, but the game was bloody and close, going down to the last ships on each side.

On the other table Steve and Frank played a game of Sharp Practice ACW. Set in 1864, Steve’s Yanks were attempting to sweep Frank’s Rebs from the table. Steve pinned the Rebs on his left flank, avoided those in the centre, and broke through on his right leading to the collapse of the rebels morale. Frank blamed his lose on poor positioning and early deployment of his main unit. Both agreed the game was great fun. 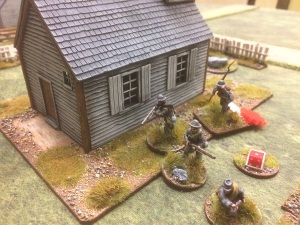 Both were good games, and it was great to get the toys to the table.

Next week is RPG – modern Vampires and Boardgames. Possibly Inis and/or Conan.