That was the content of last night’s meeting of the BAD Gamers.

Tom, who hasn’t been around for a while, and is now secretary of the Banbury wargames club, NOW Gamers, came along and had a game of Wrath of Kings with Darren A. The RPG’ers played the dark ages version of Vampire and the rest of us played a range of board games with a loose area control theme.

We kicked off with a game of King of Tokyo, which Chris and Lee took to a bitter end. Then we moved on to Alien Frontiers and new game Inis. This is an interesting mix of a 7 Wonders style drafting, an expanding map, an area control system and a choice of three victory conditions. It looks beautiful, plays fast, and after the first few turns players will understand the mechanics. After one game strategy will be understood.

The evening then rounded off with one of Frank’s favourites, Onward to Venus, which has a strong tactical rather than strategic play but is also area control in nature. Martin, playing the German Empire took the win after playing a “very quiet let everyone else get on with the game” approach. 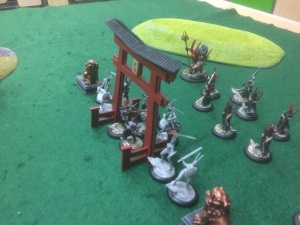 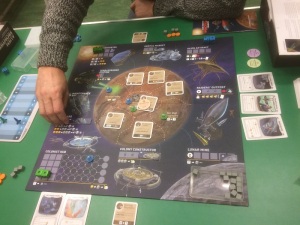 Next week looks like Frostgrave and Inis plus no doubt, more.